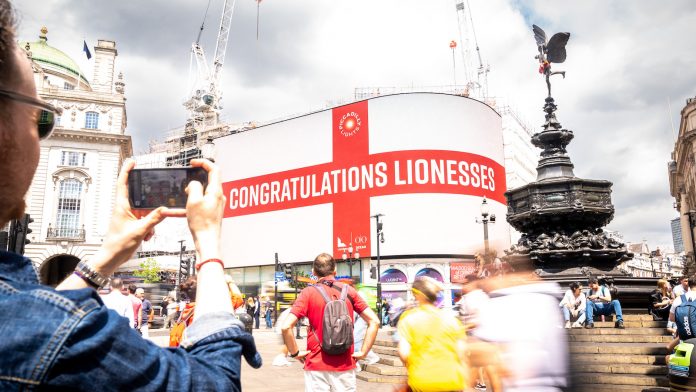 All of Britain is celebrating the brilliant England women’s team that stormed to victory against Germany yesterday and the world’s brands are quickly showing their support, too.

Ocean Outdoor the digital billboards specialist hosted a series of tactical out-of-home campaigns on some of the nation’s biggest boards today.

London-listed Ocean, which manages some of the nation’s most iconic billboards, including the world famous Piccadilly Lights, owned by LandSec, dedicated the entire Central London screen to the British champions.

The massive Piccadilly screen featured a huge England flag with the words ‘Congratulations Lionesses’ across it.

Many are now calling the first ever England UEFA victory a game-changer for the sport.

With so much money directed towards the men’s side of the sport, the historic win from the women’s team could force a reset.

Some have already called for portions of the funds to be redirected to supporting the women’s game.

The players have stories of commitment, tenacity and endurance in the face of adversity on their path to glory.

Some brands will doubtless now be queuing up to support the Lionesses in the aftermath of their historic win.