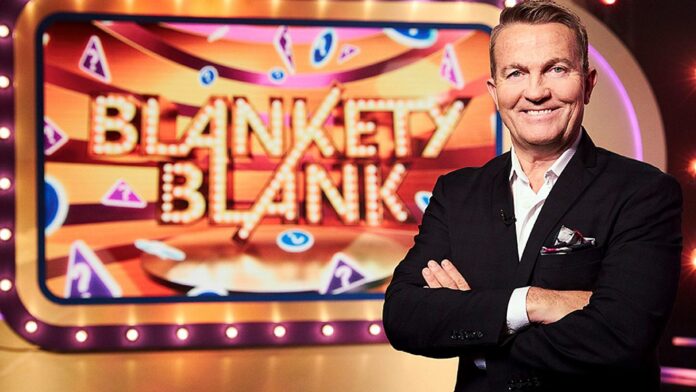 Blankety Blank, the iconic gameshow which sees celebrities helping contestants by filling in the missing blanks, will return to Saturday nights on BBC One for a brand-new series.

Made by Thames, a Fremantle label, Blankety Blank (10×35’) will once again be presented by Bradley Walsh as each episode sees a panel of six celebrities try to fill in the missing blanks over a series of rounds and help win some brilliant prizes for contestants.

With lots of laughs and fun for the whole family to enjoy, viewers can also look forward to the return of the distinctive (and incredibly catchy) theme tune, as well as the return of the iconic Blankety Blank cheque book and pen, the BBC said.

“I struggle to remember the last time I laughed as much as when I was filming Blankety Blank – so when they asked if I’d be up for doing a series, I jumped at the chance, I’m just so pleased I get to be a part of it”, Bradley Walsh said.

“I stand on the shoulders of giants like Les Dawson and Sir Terry Wogan but I’m hoping to put my own stamp on the fantastically nostalgic show.”

Kate Phillips, Director of Entertainment at the BBC, said: “Blankety Blank has it all – ridiculous questions, unpredictable celebrities, bizarre prizes and, in Bradley a very funny and much loved host.

“I can’t wait for everyone to watch and start filling in those blanks!”

Amelia Brown, Managing Director of Thames, said: “To be able to team this legendary format with the legend that is Bradley Walsh in a series, is so exciting and a match made in heaven.

“We can’t wait to get into studio with Bradley and a host of brilliant panellists.”

Celebrity guests and further broadcast details will be confirmed in due course.

Blankety Blank is a Thames (part of Fremantle) Production for BBC One and was commissioned by Kate Phillips, Director of Entertainment.

The Executive Producer for Thames is Christopher Barber and the Commissioning Editor for the BBC is Kalpna Patel-Knight.