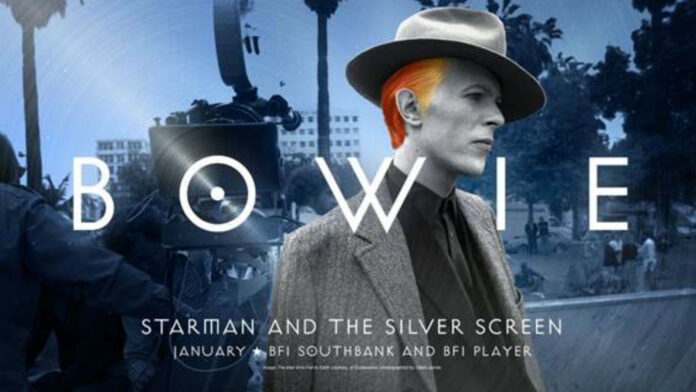 The BFI is to feature iconic British music legend David Bowie in a new special kicking off in January 2021.

Bowie: Starman and the Silver Screen, is scheduled to take place at the BFI Southbank throughout January.

The season will celebrate Bowie’s work as an actor and performer on screen (including features, concert films and docs), as well as explore how his fascination for film fed an insatiable creative drive throughout his career.

Five years since his death, it can be hard to look beyond Bowie ‘the star’ to appreciate the characters he portrayed, but this season will seek to do just that.

Per Government guidance, BFI Southbank continues to operate with social distancing and enhanced health and safety measures; more information can be found in the press release.

Running from 1-30 January, the season’s mixture of feature films, television and documentaries will show that, whether a bit-part, starring role, or being just himself, David Bowie was always magnetic on screen.

Films screening in the season will include The Man Who Fell to Earth, Merry Christmas Mr. Lawrence, Christiane F., The Hunger and Labyrinth.

Documentaries, concert films and TV work will include Ziggy Stardust & The Spiders From Mars, Baal, Bowie at Glastonbury 2000 and a collection of rare TV material from the BFI National Archive.

As a composer, innovator and concept artist, Bowie’s fascination for film fed an insatiable creative drive which the season will also explore, via a selection of titles that influenced him. Hooked to the Silver Screen: Bowie at the Movies will feature a range of titles, from 2001: A Space Odyssey and The Cabinet of Dr. Caligari to Querelle and Taxi Driver.

The season will also include special events at BFI Southbank and online via BFI YouTube; a highlight of the events programme will be the return of Bug with comedian Adam Buxton on what would have been Bowie’s 74th birthday – 8 January.

Bowie’s engagement with film, theatre and design forged his high-concept approach to pop stardom and supercharged the evolution of music video; BUG Special: David Bowie will be a fan’s journey through the career of an artist whose influence on modern popular culture will continue to be felt for decades, featuring music videos, rare clips, animation and comedy. The full online events programme will be announced soon.

Some key Bowie titles, including The Man Who Fell To Earth and The Last Temptation of Christ, and a number of the films from the Hooked to the Silver Screen series will also be available for audiences across the UK to watch on BFI Player throughout January as well.

It can be hard to look beyond Bowie ‘the star’ to appreciate the characters he portrayed, but five years on from his passing, Bowie’s star still sparkles brightly.