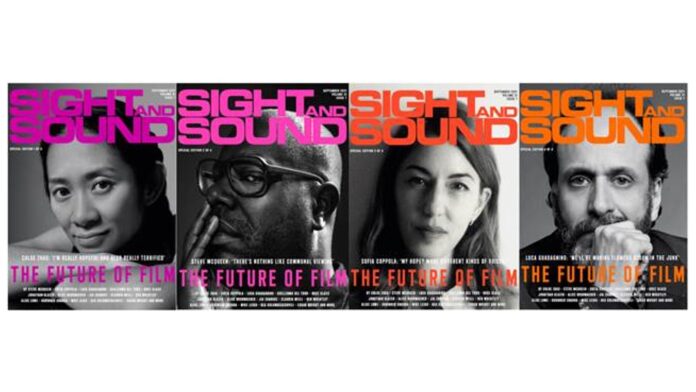 Iconic international film magazine Sight and Sound today launchdd a new-look and claimed to have a new editorial approach for the title, too.

Founded in 1932, Sight and Sound has covered film culture for almost 90 years and the relaunched magazine realises the vision of Editor-in Chief Mike Williams, the BFI said.

Developed in collaboration with award-winning design agency Pentagram, the redesigned magazine gives Sight and Sound a bold new visual identity with a respectful nod to its heritage.

Popular regular features such as Dream Palaces are joined by new features looking at soundtracks and poster art, while in-depth articles and reviews remain the backbone of the magazine.

New regular columnists Pamela Hutchinson, Jonathan Ross and Phuong Le will be joined by a guest columnist in the Director’s Chair, the first of which is Swedish filmmaker Ruben Östlund.

The September issue, out on 2 August (not why this doesn’t make it the August issue, eh?), is themed ‘The Future of Film’ and features four filmmaker cover stars: Chloé Zhao, whose third feature Nomadland swept the boards at the 2021 Oscars; Steve McQueen, winner of the 2012 Best Film Oscar for 12 Years a Slave whose Small Axe was seen by many as the most important British television series of 2020; Sofia Coppola, winner of the best original screenplay Oscar for Lost in Translation in 2004; and Luca Guadagnino, whose 2018 film Call Me By Your Name was nominated for multiple Oscars and BAFTAs.

Commenting of The Future of Film, Zhao said: “To get together in a room with strangers and experience something together, it should be in our nature.

“But there’s a disconnect culturally and societally that is preventing that urge: we’ve become less trusting of each other to share that space.

“It’s not that people want the small screen — the screens at home are getting bigger. It’s about whether you want to go into a dark room with strangers or not.”

McQueen is quoted saying: “I don’t know if cinema needs saving, but it’s definitely worth saving. Personally, I adore it. I love being in a cinema with an audience.

“I love the oohs and the ahhs, the applause, the titters, and communal viewing? There’s nothing like it.”

Coppola added: “I hope that you’re going to see more and more different kinds of voices represented. If you look back [at who was making films in the past] it was one group of mostly men.

“I’m always happy to see something I haven’t seen before and be surprised, so we’ll see.”

And Guadagnino said: “Cinema in itself doesn’t need to be saved because cinema is an entity that existed before us and will always exist after us.”

Also revealed today is a special quarterly collaboration with the Black Film Bulletin, edited by founder and original editor June Givanni alongside her new co-editors Jan Asante and Mel Hoyes.

Launched in 1993, the Black Film Bulletin was fuelled by a prolific new wave of Black visual culture exploration.

Following a prolonged hibernation, the BFB returns to revisit key moments from the archives, explore current perspectives and cast a critical eye on what the future holds.

“For almost 90 years Sight and Sound has been a place for independent critical thought, and this new-look magazine builds on that legacy.

“We support a wide range of opinions, give a platform to a diverse range of voices and we explore a broader idea of screen culture than we have in the past, but our identity remains rooted in our belief in the power of cinema.

“Magazines are an important part of our culture, they’re lifelines, and this new magazine sits in the middle of an expanding cross-platform world that will ensure that film-lovers around the world can access us however they like, whenever they like for years to come. Long live cinema, long live Sight and Sound.”