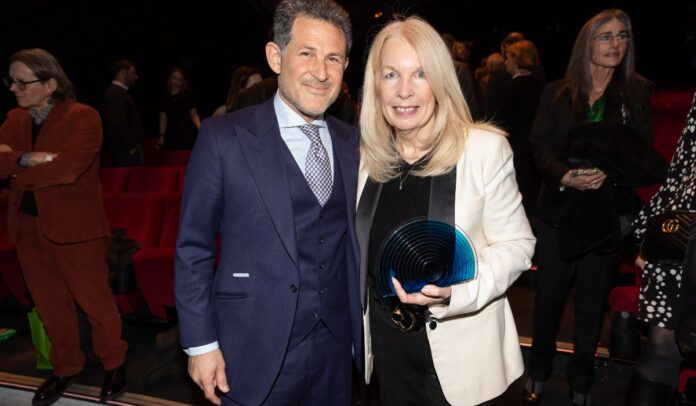 The BFI has honoured outgoing CEO Amanda Nevill with a Fellowship on her last day at the organisation.

Last night the surprise award was presented by Chair Josh Berger at BFI Southbank. The award took place in front of a packed cinema of industry guests and colleagues.

The Fellowship honours and celebrates Amanda’s outstanding contribution to British film, television and the moving image. It pays tribute to her 17 years at the helm of the UK’s lead organisation for film.

During her tenure Amanda has taken the institute from strength to strength.

Amongst many other achievements, she has ensured the institute’s National Archive is safe and accessible for future generations; successfully taken on the role of the UK’s National Lottery distributor for film; transformed BFI Southbank into one of the coolest venues in London; launched the BFI Film Academy; VOD service BFI Player and BFI Network across the UK; and introduced pioneering diversity standards to the industry.

“Never in my wildest dreams had I imagined being gifted a BFI Fellowship” Nevill said.

“I am still in a state of mild but pleasurable shock. I hope that everyone I have worked with at the BFI will know they own a tiny bit of this award.

“I’ve always stood on giants shoulders; working for an art form and industry that is the zenith of humankind’s artistic endeavour.

“It also joyously means I can, with no excuse, stay close to and applaud an organisation and the people I respect and love so much.””

Berger said: ‘It gives me enormous pleasure to honour Amanda Nevill with a BFI Fellowship”.

“Amanda has driven the transformation of the BFI with boundless enthusiasm, energy, and determination. And with an infectious love of cinema, television, and the moving image in all its forms.

“The BFI is unrecognisable today from the cultural body that Amanda inherited in 2002. It is now internationally respected and revered and one which the industry and Government look to for expert leadership and guidance.

“Culturally the BFI remains a world leader, at the vanguard of supporting British independent film and the exhibition of world cinema.

“Amanda is a truly exceptional leader, she has been at the apex of our industry for years, a completely inspirational figure who has highlighted the art of the possible and always embraced opportunities to mentor and empower.’

On stage tributes to Amanda last night were also made by filmmaker Paul Greengrass and BFI Trust Chair Caroline Michel (CEO of Peters Fraser and Dunlop), with actors Tom Hiddleston, Zawe Ashton and David Walliams, Working Title’s Eric Fellner, filmmakers Carol Morley and Gurinder Chadha, and many others contributing to a film that celebrated Amanda’s enormous achievements across the industry.