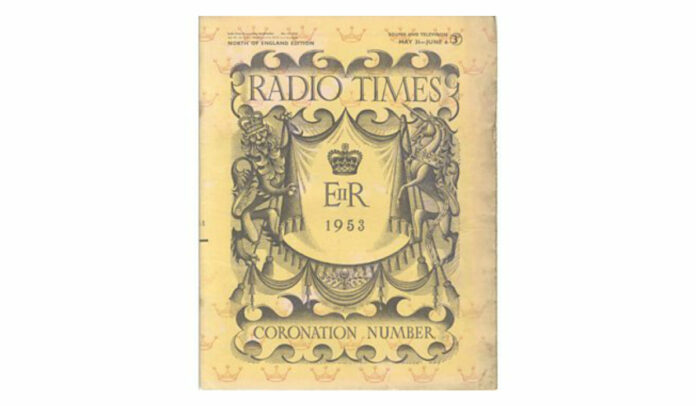 Original scans of listings for landmark BBC programmes such as Panorama, The Sky at Night and The Archers have been made available online for the first time today, as part of a BBC project digitising archive copies of the Radio Times.

The Genome Project, which has already made the magazine scans from the 20s, 30s and 40s available to the public, now reveals the key role that the 1950s played in shaping the current TV landscape.

With the 1955 launch of ITV ushering in a new era of creative competition for broadcasters, the 50s saw the rise of many popular television programmes, the BBC said.

These ranged from the ‘Weekly Window on the World’ show, Panorama, which covered stories of contemporary ‘people, places and problems’, to Strictly’s predecessor, ballroom dance contest Come Dancing.

Copies of the Radio Times magazine included features on Zoo Quest, the first wildlife documentaries presented by a young David Attenborough, who continues to inform BBC audiences 65 years on.

The magazines also portray the growing popularity of children’s television at the time, with the start of Watch with Mother, a series that ran from 1953 until 1978 and included much-loved characters Andy Pandy and Bill and Ben, The Flowerpot Men.

This was followed by the start of Blue Peter, billed as ‘toys, model railways, games, stories, cartoons’, in 1958.

Advances in technology during the decade meant that it marked some major milestones in TV history, including the first televised general election in 1950, the launch of daily TV news in 1954 and the Queen’s first televised Christmas message, which took place in 1957 on the twenty fifth anniversary of the first royal broadcast.

“Radio Times in the 1950s reflects an era of TV ‘firsts’, with the BBC bringing the nation together in front of the small screen for the first time for events like the Coronation”, Jean Seaton, BBC Historian, said.

“Against the background of Cold War anxiety the magazine also captures the post-war, fun seeking energy of the decade perfectly with ballroom dancing, cooking, holiday and children’s programmes taking their place in the schedules.”

Broadcasting was taken further and wider than ever before, with regular regional television beginning in 1957 and international broadcasts becoming commonplace.

By the time of the Coronation of Queen Elizabeth in 1953, television covered all major UK population areas, and for the first time the television audience for an event exceeded that of radio.

But while the 1950s saw TV growing in popularity, the Radio Times magazines reveal that it remained a golden age for radio, with The Archers becoming a regular on airwaves after its introduction in the early 50s.