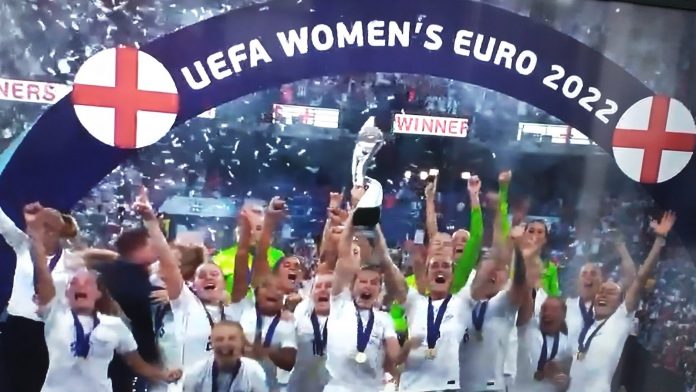 The Women’s Euro 2022 tournament continues to break records, with the BBC saying it garnered overall TV reach of 27.4 million and was streamed 18m times across BBC iPlayer and BBC Sport website and app.

Millions of viewers across the UK have been gripped by all of the action this July in the Women’s Euro 2022 tournament hosted in England.

Many memories have been created as Northern Ireland featured in their first-ever major finals, extra-time winners and stunning goals took over social media and England finally got their hands on a major trophy for the first time since 1966.

The tournament overall saw total TV reach of 27.4m (15mins or more) and was streamed 18m times across BBC iPlayer and BBC Sport website and app.

England clinched a major tournament trophy for the first time since 1966 as the Lionesses faced Germany at a sold-out Wembley Stadium yesterday – this game attracted a peak TV audience of 17.4m on BBC One and was streamed 5.9m times across BBC iPlayer and BBC Sport website and app.

BBC Director-General, Tim Davie, said: “We are incredibly proud to have championed women’s football and are thrilled we were able to bring such a special sporting event to the public.

“Everyone at the BBC is delighted with how successful this tournament has been.”

This year, BBC audiences will have continued access to women’s football with a match shown each round from the Women’s Super League on BBC One or BBC Two, the Women’s Football Show, live women’s FA Cup football including the semi-finals and final, and other international fixtures.