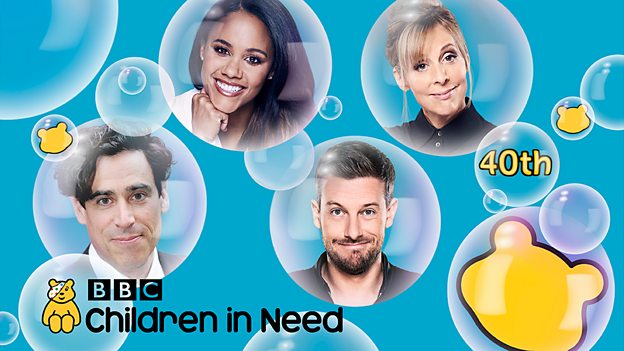 This year BBC Children in Need will be celebrating its 40th anniversary culminating in a very special evening of unmissable television live from BBC Elstree Studios on Friday 13 November.

From Strictly Come Dancing, to EastEnders and Doctor Who, the fundraising spectacular will be jam-packed with exclusive sketches, exciting performances, music, dance and a few surprises!

The 40th show will be hosted by some of the biggest names in entertainment, the show will be a brilliant spectacle not to miss and will raise money for children and young people across the UK facing a range of disadvantages, who need help now more than ever.

Standing in the wings ready for the big event are Mel Giedroyc, Stephen Mangan, Alex Scott MBE and Chris Ramsey as the hosts come together to help disadvantaged children and young people across the UK.

The money raised through BBC Children in Need’s 2020 Appeal will help support local charities and projects which are providing essential frontline help to children and young people in communities throughout the UK.

Commenting on her upcoming role as host, Griedroyc said: “I feel incredibly honoured to be presenting my fourth BBC Children in Need on this very special anniversary. I can’t believe it’s 40 years old – two years older than me!”

“It’s a time I associate with family, and of course, my own children growing up. It’s a time when I think the country comes together in a very brilliant and simple way.

“We are reminded that children are the most precious commodity we have in Society and that they need nurturing and helping. It’s more important this year than ever before.

Ramsay said: “I really want that figure at the end of the night to be absolutely huge. It’s been such a hard year for so many children and I’m looking forward to helping raise some serious money for the charity.

“I’ve watched it my entire life, so it’s incredible to be a presenter this year but I also did some work for BBC Children in Need a few years ago and ended up becoming a patron of a charity for young carers in the North East.

Mangan added: “The whole world is struggling with the repercussions of this current situation and we know that in difficult times it’s the vulnerable in society that suffer the most.

“That makes the work of a charity and an event like BBC Children in Need more urgent and more vital than ever.”

And Alex Scott said: “It’s a really tough time for the British public, but what this year has shown is how we can come together in tough times for people that need us.

“If people can donate, you know it will go towards a great cause, and watching gives the show and cause awareness which is so important.