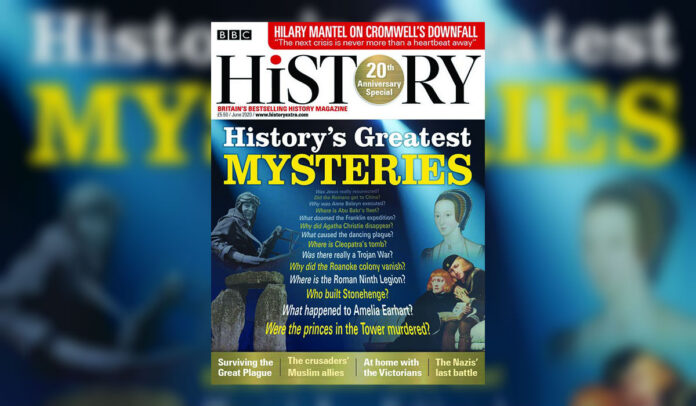 The award-winning BBC History Magazine celebrates its 20th anniversary this month with a packed birthday issue.

Inside there’s a special feature on the 20 Greatest Mysteries in History; plus a column by popular historian Michael Wood reflecting on the most memorable historical events of the last 20 years.

Launched in 2000 BBC History Magazine remains the number one print title in the sector.

It now reaches more than 694k monthly consumers across a range of platforms.

In addition to the print magazine, the title includes the hugely-popular HistoryExtra.com website; an award-winning podcast and regular live reader events.

“With a loyal and engaged print readership, as well as huge and growing numbers for our complementary website and podcast, we’re in a strong position to continue progressing over the next two decades and beyond.”

The HistoryExtra Podcast, produced by the editorial team behind BBC History Magazine and historyextra.com, was launched in 2007 as a monthly podcast.

As its popularity has increased, History Extra is now released four times a week; gaining over two million listens a month and over 25 million a year.

With more than 700 episodes in its back catalogue, HistoryExtra features interviews with historians, authors and broadcasters on a range of historical topics; from Ancient Egypt, the Vikings and Medieval history, to the Industrial Revolution, the World Wars and beyond.

Historyextra.com is THE place to go online for history content on a vast array of subjects.

The website achieved a record-breaking four million-page views in April from a record 2.3 million unique users.

In a first for the brand, HIstoryextra.com is hosting a Medieval History Festival for the week of 18-22 May.

The online event will be led by a series of lunchtime video talks from leading historians. It will cover topics such as medieval medicine, violence, food and drink, love and marriage, and religion. It concluded with a panel discussion between the historians with questions from the historyextra audience.

A series of history talks and festivals, including the BBC History Magazine History Weekends in Winchester and Chester, are held throughout the year at historic venues across the country.

They typically attract thousands of history enthusiasts and feature the biggest names in history; covering everything from the Bayeux Tapestry to the World Wars and much more in-between.

David Musgrove, Content Director of BBC History Magazine added: ‘I’ve been with the magazine, as editor and then content director, for quite a lot of our 20-year history. I’m delighted that we’re still going strong, even with the turbulence today.

“I’d like to thank our loyal and engaged audience for sticking with us; and of course for all our new listeners, readers and viewers who are coming to us for context to, or escape from, the travails of the modern world.’