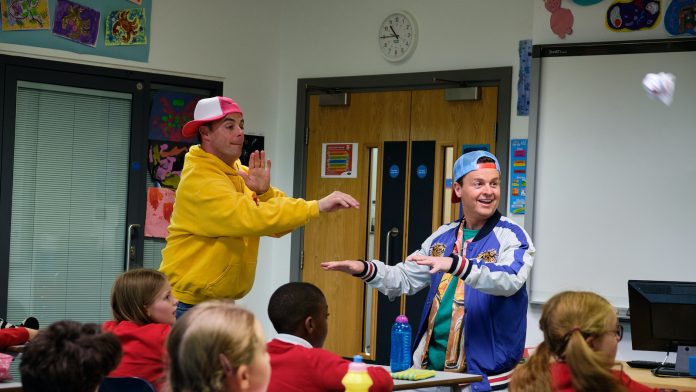 The latest instalment of the Bank of Antandec campaign for Santander sees TV stars Ant and Dec return to role as fictional banking CEOs.

This time, they’re attempting to teach children money confidence – however they’ve not quite got it right.

In contrast to the Bank of Antandec’s endeavours, Santander has teamed up with Twinkl – one of the world’s largest online educational platforms – to launch free, curriculum-friendly learning materials, highlighting their commitment to supporting financial education, both at home and in the classroom.

Breaking 23 June, ‘Back to School’, the 60-second commercial at the heart of the campaign, shows the banking supremos bursting into a classroom to impart their questionable financial wisdom, only to find that Santander – with the help of Twinkl – have got their first with The Numbers Game.

Research shows that money habits start forming between the ages of three and seven and long-term financial outcomes can be predicted from behaviours in children as young as five.

Despite this, over six in ten UK children and young people say they haven’t yet received any financial education at school.

The result is many children and young people are unprepared for the money challenges and decisions that lie ahead.

Financial difficulties were particularly problematic among young people with over two-thirds believing a lack of education on the subject had played a significant role in leading them into debt.

As part of the financial education partnership, Engine and Sidhu & Simon’s campaign has produced introductory videos and learning for teachers, parents and carers to use in classrooms and homes to inspire children from age 5 to 16 to help build money confidence.

The Numbers Game, originally developed by Santander and Sidhu & Simon, will be accessible to over 30,000 UK schools, comprising of 600,000 teachers and eight million children and young people aged between five to 16 years old.

The Numbers Game represents a pioneering step forward for financial education and has already helped over 1.5 million children and young adults become more confident with numbers and money.

This underpins the strategy Santander have  spent the past three years developing and having the Bank of Antandec now supercharge The Numbers Game will help drive an even greater adoption of the materials among teachers, parents, and carers, as well as sparking the emotive connection that helps children and young people rise to a new challenge.

Dan Sherwood, Director of Marketing at Santander, said: “The CEOs of the bank of Antandec are back on our screens, this time trying to impart their financial wisdom on children and young adults.

“But whilst their know-how only stretches to Match Attax cards, we’re already working hard with Twinkl to improve financial education for everyone by providing free, curriculum compliant resources. I’d encourage anyone with young family members to download the Numbers Game learning packs and to tell friends and family to do the same.”

Jo Moore, Creative Director at Engine said: “In our latest venture, maverick bankers Antandec go back to school thinking they have the perfect solution for teaching kids how to be money confident.

“Little do they know that pesky other red bank has got there first. What’s more, Santander’s partnership with Twinkl is streets ahead bringing financial education into classrooms and homes.”

Nav Sidhu, Co-Founder and Managing Director at Sidhu & Simon, said: “No longer do you need to go trawling online for ‘money skills’ materials that often bear little relevance to how children are taught at school.

“Now, for the first time, The Numbers Game is piping financial educational materials directly into classrooms and homes from the most trusted source in educational publishing, Twinkl.

“This is a great example of brand who are not only purpose driven but also have large scale intent.”

Santander and Engine developed the Bank of Antandec creative platform in 2019.

The campaign, which has been unashamedly mass market and joyous in its appeal, has driven brand awareness in a category that often takes itself too seriously, achieving significant standout.

In 2020 it won a Bronze Effie Award in the finance category.