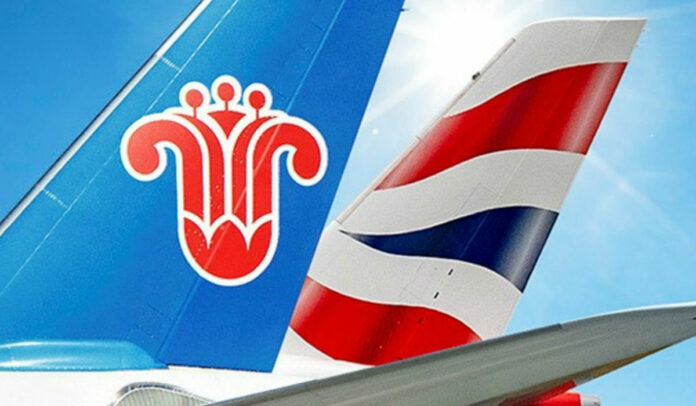 British Airways has signed a joint business agreement with China Southern Airlines, for travel from 2 January 2020.

The deal comes just as the UK prepares to leave the European Union at the end of January 2020.

BA said that seats are available for sale via the new partnership from today.

The agreement will benefit customers of both airlines by opening more destinations between the UK and China, with a greater choice of flights and enhanced frequent flyer benefits, BA said.

It will allow the airlines to cooperate on scheduling and pricing, providing customers with more flexible flight options and an attractive range of fares.

British Airways customers will be able to travel more easily on a combined route network which will develop over time thanks to both airlines’ move to the new Beijing Daxing International Airport.

The joint business will initially see the two airlines code-sharing on all direct flights operated on mainland routes between London and the Chinese cities of Beijing, Shanghai, Guangzhou, Sanya, Wuhan and Zhengzhou.

This will expand to both airlines’ extensive domestic networks.

Alex Cruz, British Airways’ Chairman and CEO, said: “We are delighted to announce this joint business which will bring the UK and China closer together by providing British Airways and China Southern Airlines customers with a wide range of benefits.

“The agreement reinforces our commitment to boost tourism and business travel between the two countries and we look forward to strengthening the relationship further.”

Customer benefits will include greater opportunities to collect frequent flyer points, the ability to book through both airlines’ web or app-based platforms, enhanced lounge access and access to high-quality Chinese and British products and services on board and on the ground.