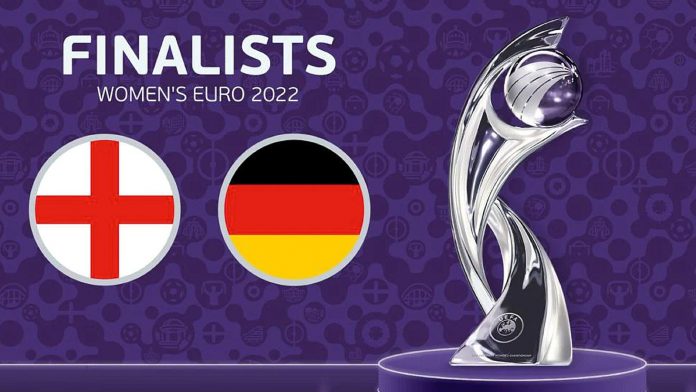 Women’s sport is now mainstream and we can hardly contain our excitement that Britain’s Lionesses are through to what is certain to be a thrilling Anglo-German final of the UEFA Women’s EURO 2022.

There’s something different about this year’s competition, which has managed to get the entire nation behind a sport which hitherto has been treated as a sort of lower echelon event, simply because it is a women’s tournament.

Like many, Anneka Vestey, Head of Production at Contented Group, never thought she’d witness such excitement and support for the female side of the ‘beautiful game’ in her lifetime.

With prime-time coverage on the UK’s premiere broadcaster, the BBC, the competition has proved there is huge appetite for content around major league events such as the Women’s EURO 2022.

And, as Vestey explains below, getting the tone right when speaking to audiences in campaigns around ‘big moments’ in women’s sport is crucial…

As soon as Georgia Stanway’s goal hit the back of the net in the EUFA quarter final where England took on Spain, I jumped to my feet.

Could it really be coming home this summer…after all these years of hurt? We dare to believe.

But, no matter what happens in the remaining games, my lasting memory of the tournament this year will be the faces that I see in the crowd, match after match.

Families from all backgrounds, children, groups of teenagers, all smiling, cheering and jumping to their feet to support the women representing their country. It’s not really something I thought I’d see in my lifetime.

Attendance for the Women’s Euros matches so far has surpassed all records; 248,075 spectators by game 16 of the 31-match tournament.

So it’s set to be the most attended female football tournament yet. But this sudden love for women’s sport hasn’t come out of nowhere, it’s been slowly building, year after year, with tireless work behind the scenes to bring women’s sports to audiences that would never before had access.

I’m proud to have played a small part in that with the work we do for The Hundred, the England and Wales Cricket Board’s professional franchise 100-ball cricket tournament, involving eight men’s and eight women’s teams located in major cities across England and Wales, which took place for the first time in July and August last year.

The Hundred’s core mission is to create a tournament that provides an equal platform for men and women in order to grow the game and bring it to new audiences.

And they announced that the first game of the first ever tournament, would be a women’s game between the Oval Invincibles and Manchester Originals, at the Kia Oval.

There was no better way to put a stake in the ground to say we’re here for equality and we’re here to elevate the womens’ game.

But initially, ticket sales were slow. So, as The Hundred’s digital production partner, we were tasked with devising a content idea to try to help boost ticket sales and attract more women and families to that momentous game.

The result was a campaign called #BETHERE.

With a hero film, social teasers and a paid ad, the campaign was a rousing call to action for all fans; fans of cricket, fans of women’s sport, fans of sport in general – to be there for that historic moment.

Featuring interviews from players, legend of the game Nasser Hussain, Hockey player Sam Quek and more, the campaign got to the heart of what it meant for a tournament of this size and scale to be raising the profile of the women’s game.

Getting the tone of this film right was critical. As a woman, I’ve seen plenty of campaigns that apparently “speak to me” but quite frankly couldn’t be further from my experience.

So by putting our diverse team, both in regard to gender, ethnicity, age and experience to work on this, we got the tone right.

There were a mix of voices in the film, both male and female cricketers were represented, with the men standing up as allies.

It wasn’t flowery, worthy or pleading. But like so many of the best campaigns for women’s sport, it showed the women as passionate, hungry for the win, competitive and heroic. All the things I wish I’d been able to see when I was growing up.

The campaign was a success, and the resulting ticket sales meant that a record crowd of 7,395 packed the Kia Oval in the highly-anticipated tournament opener.

And the tournament as a whole saw record attendances of 267,000 people attending the women’s games.

The Hundred also smashed TV viewing figures with 8.3 million viewers tuning in from home, 59% of whom hadn’t watched any other women’s sport in 2021 prior to watching The Hundred (Womens Sport Trust, Visibility Uncovered).

It’s hard to look at those numbers and not see that as a watershed moment, and with the Women’s Euros clearly following suit this year, the appetite for consuming women’s sport has never been greater.

So it’s more important than ever for us to keep producing content that is bold and innovative and not to fall into the lazy tropes of marketing female sports content.

So what can we do as content agencies to continue to draw in audiences to women’s sport?

First, allow the audience to see themselves in your content – “you can’t be what you can’t see” still reigns supreme.

And finally, the non-negotiable rule for creating content for women’s sport…have female creatives (writers, editors, producers, directors) on your team. It will ensure the work is authentic, has a point of view and rises above an already cluttered market.

I was there that night, at that opening game of The Hundred. And looking around me, at the faces of the fans, of all ages, genders and ethnicities, cheering and spurring on their team, I was in awe of how far women’s sport has come in my lifetime.

It’s not something I thought I would see…but I am so here for it.