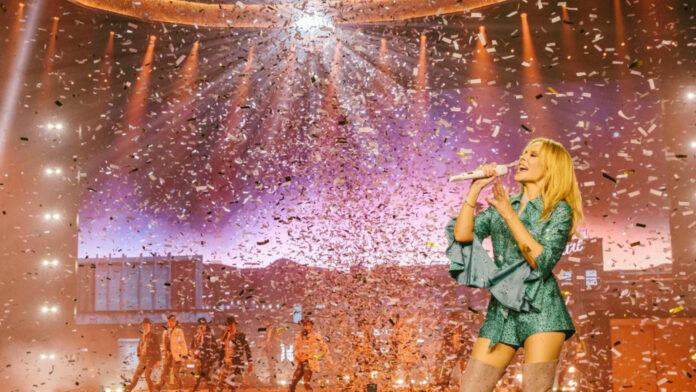 After visiting 33 cities across Europe and Australia last year, Kylie Minogue’s critically acclaimed Golden Tour will be available to stream for the first time exclusively on All 4 from Friday 13 December.

The full two-hour uninterrupted event is the first recorded concert to be streamed on All 4.

Featuring over 30 songs including Dancing and Stop Me From Falling taken from Kylie’s 2018 number one album Golden, to iconic hits such as Spinning Around, Can’t Get You Out Of My Head and Especially For You, the tour is guaranteed to have you up and dancing around your living room.

“I had so much fun every night performing for everyone on the Golden Tour”, Kylie Minogue said.

“I’m so excited that my UK fans will be able to watch the full concert at their fingertips on All 4.

“I’m looking forward to being able to relive it all over again!”

Charlie Palmer, Managing Editor of All 4 said: “Her Glastonbury ‘Legends’ slot made 2019 very much the year of Kylie, so we’re delighted that we can finish the year by giving the gift of the Golden Tour, in full and uninterrupted.

“It’s a truly fantastic addition to All 4, and a chance to see Kylie doing what she does best.”

Kylie will also be the subject of a 90-minute Kylie themed extravaganza on Channel 4 on Christmas Day at 10.30pm.

Kylie’s Secret Night will allow viewers to celebrate with the quintessential pop princess like never before as she is joined by Alan Carr for the ultimate celebration.

The linear airing of The Golden Tour will follow at 12am.