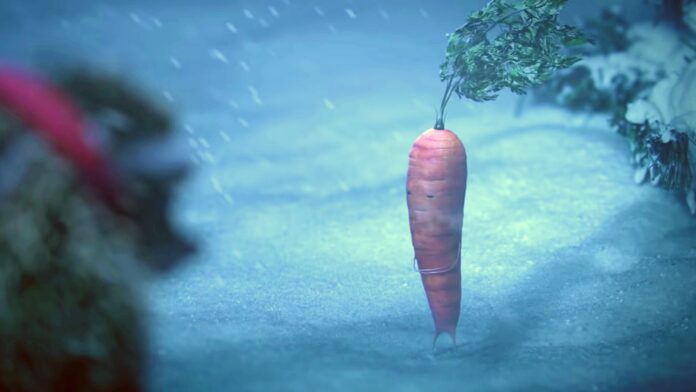 The endearing brand mascot that has featured on our screens for the last five years, hit the top spot in the rankings of Britain’s Favourite Ad 2020, operated by advertising effectiveness firm System1.

Measuring the emotions that each ad generated, System1 Group’s unique and predictive behavioural methodology surveyed 1,500,000 people across the country in real time to determine how viewers responded to each ad.

Drawing on Paul Ekman’s research into the seven core human emotions — fear, disgust, anger, surprise, contempt, sadness, and happiness — System1 Group asked respondents to choose which emotion the ad triggered in them and how strongly they felt it.

And a carrot won!

In a hugely challenging and turbulent year, advertisers have struggled to know what tone to strike in their creative campaigns.

But when the results were announced in a virtual webinar titled ‘Britain’s Favourite Ad 2020’ last week, it was clear which themes struck the right tone.

Despite a year like no other in recent history, the results mirrored the trends seen at Christmas and in the recent Super Bowl ad spots: that creative consistency has been a good choice for advertisers.

Aldi’s Kevin the Carrot appeared for the fifth time at Christmas, allowing audiences to see the journey from baby chantenay to fully-fledged adult carrot.

A notable trend this year was seeing brands taking fewer risks as the year went on, and for good reason: in the year of COVID-19, budgets were cut and severe restrictions were placed on filming.

System1 saw a reflection of the turbulent environment with more low-key concepts – and it proved effective judgement in the audience response.

Alongside Kevin the Carrot, other recognisable characters, such as James Bond for Heineken, the meerkats for Compare the Market, Wallace and Gromit for DFS, and of course Santa for Coke, hit the sweet spot, with all four brands successfully hitting the Top 10.

When it came to referencing COVID, context and timing proved crucial. When brands initially responded to the crisis showing that they were taking action, saying thank you and celebrating the power of human connection, emotional engagement was incredibly high.

System1 saw some of these Ads achieve the full 5 stars such as ITV’s wonderfully moving ‘Clap from carers’, Santander using Ant & Dec to connect a Mother with her Daughter and Malteasers proving that we haven’t lost our sense of humour!

However, this audience reaction and engagement notably decreased when ‘COVID fatigue’ set in. It proved to be short-term effective in the context of the pandemic’s early stages and by Christmas any reference to COVID saw a dramatic drop in engagement with an average drop of 1 star for any brand using it.

Despite the backdrop of a global pandemic, the scoring shows that the power of creative overall is in strong health with a small increase from an average 2.2 Star in 2019 to 2.3 star in 2020 quite remarkable all things considered. However this does mask some significant shifts in the number of ads being made in certain categories with notable increases across home and comfort categories, such as beer, wine and spirits, confectionary, pets and charity. The average Star rating in these categories increased by up to +0.5 star as they become more salient during the pandemic.

Sean McGinty, Marketing Director at Aldi UK, said: “We’re all thrilled to be named the nation’s favourite advert of 2020.

“It demonstrates that it has taken Kevin and his extended family and friends to their hearts.

“Christmas 2020 was a year we all needed a little extra festive spirit and welcome magical relief; Kevin’s turbulent journey to get home to his family for Christmas brought just that.”

“He’s had many Christmas adventures, like learning to drive in the Coke Christmas truck and then singing with Robbie Williams.

“This year he flew an F18 fighter jet with a turkey! But the real story is Kevin loves Christmas and it’s great to know the British public love him too.”

Jon Evans, Chief Marketing Officer at System1, said:  “Congratulations to Aldi and the team at McCann for achieving the top spot in the Nation’s Favourite Ads 2020 with ‘Kevin the carrot’.

“Aldi deserves huge credit for being consistent, when others might have changed, and also mastering the craft of an emotionally engaging ad.

“The way they tell the story of Kevin’s journey, the powerful soundtrack and the use of a familiar character is an example of how to get this right.

System1 Group’s star rating system rates ads from 1-5.9 Stars based on people’s emotional response to each ad. These stars predict an ad’s potential to contribute to long-term growth for the brand.

Utilising the company’s benchmark star rating system (from 1-5.9 with 5.9 being the highest), the ads were each awarded a score to demonstrate their potential impact on market share growth.