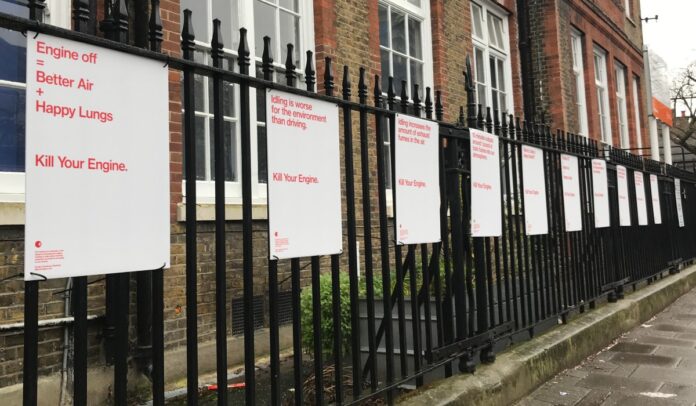 Design agency Accept & Proceed has launched a campaign aimed at drivers who drop children at Hackney primary schools to ‘Kill your engine’.

It forms part of a bid to cut levels of air pollution in London, the firm said. It’s a problem that is contributing to the emergence of a generation of children with stunted lungs.

A series of posters and A6 flyers have been created to empower people to approach drivers who let their cars idle.

One message reads: “Idling is worse for the environment than driving.”

Another says: “Ten minutes outputs around one pound of toxic fumes into our atmosphere”.

All the messages conclude with the line “Kill your engine”.

The design studio behind the campaign, Accept & Proceed, has also created a web portal killyourengine.com, where visitors are able to customise, download and print their own posters.

“We all want the best for children but many drivers do not to make the connection between their idling habit and the poor quality of the air our pupils breathe”, said Mr Logan, Head Teacher at Daubeney Primary School in Hackney.

“This poster campaign seeks to educate our community about idling cars at the moment that it’s most impactful – right when it’s happening.

“We look forward to seeing an improvement in our air quality as a result.

David Johnston, ECD and Founder at Accept & Proceed, said: “It’s a sad but common situation that people want to ask idling drivers to turn their engines off but often feel uncomfortable doing so without being literally armed with the facts.

“As we started to create posters to distribute at schools in Hackney, where some of our children are pupils, we realised this is a problem at thousands of schools all across the country, affecting the people who need our protection the most.

“So it also became important that we make the resources available to anyone who needs it.”

The flyers and posters will appear at Daubeney Primary School and Daubeney Nursery in London’s Hackney area.